Hello Readers, today you will learn about Angular components. I have added many images, to make it easy to understand for my readers, which makes this article appear a little longer. However, what’s the meaning of diving, if the water is shallow. Right!? So get set and here we go!!

Typically, it is a type of directive with templates, styles, and logic for user interaction. It is exported as a custom HTML tag like as: <my-component></my-component>. The angular component is initialized by an angular dependency injection engine.

A webpage containing an article with comments, categories, a news feed, and header, the footer can be managed using the angular components as given below: 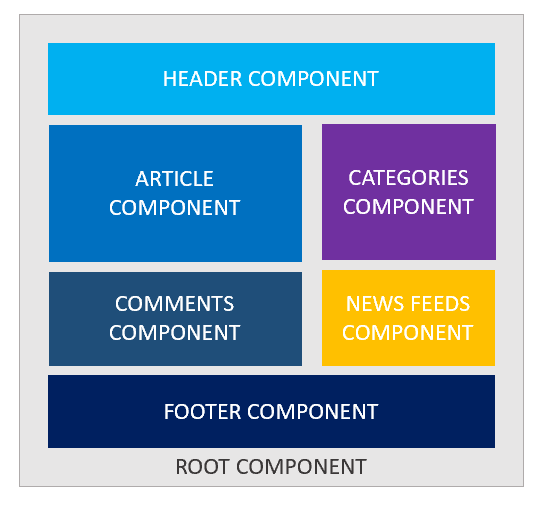 Now, you all must be thinking, why should we use components? Component inculcates many benefits to that of Angular itself. It provides:

Difference between Component and Directives

Next, the question that arises in our mind is how Angular identifies the components among many other files? The answer is that, if you open any ts file of the component, you will see @component metadata and below it, there will be one class. The @component decorator is responsible for identifying the class as a component and for specifying its metadata.

Now, let us move towards creating our first component. Initially, your app structure will look something like this:

Now, the first inbuilt component that you see in the app. Now, looking at this, you can assume the basic structure of a component. It consists of 4 files: HTML, CSS, TS, SPEC.TS. 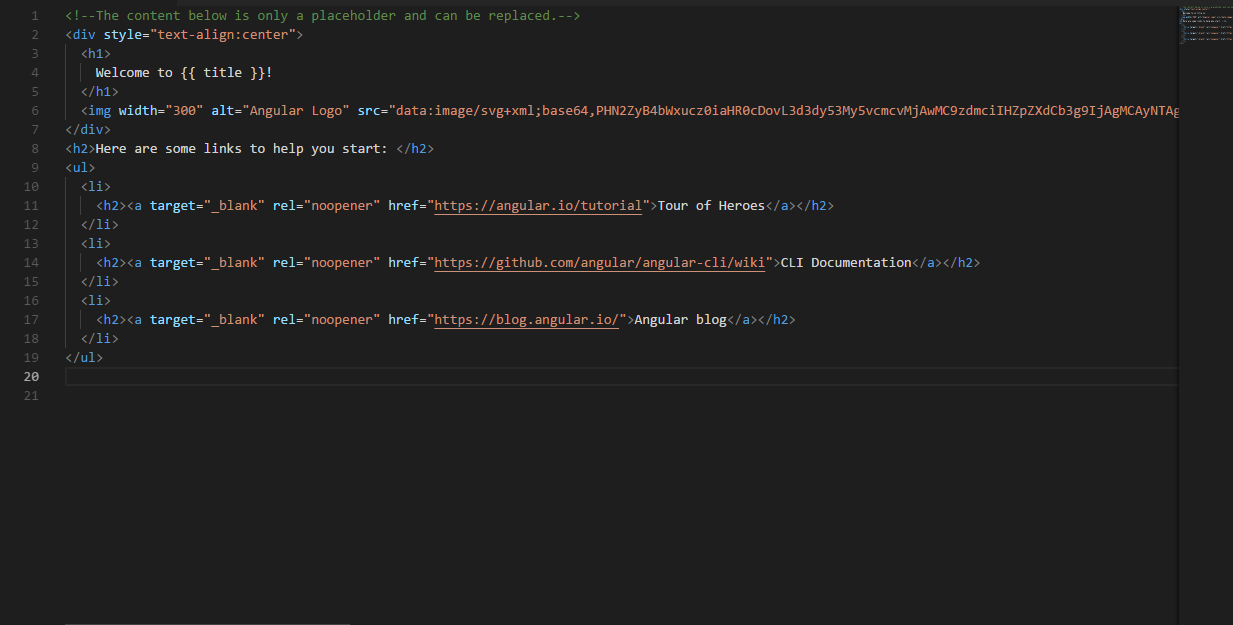 This file has been created by Angular. It is the basic HTML file. If you run this app, the first page you’ll see as an output will have this HTML written there. 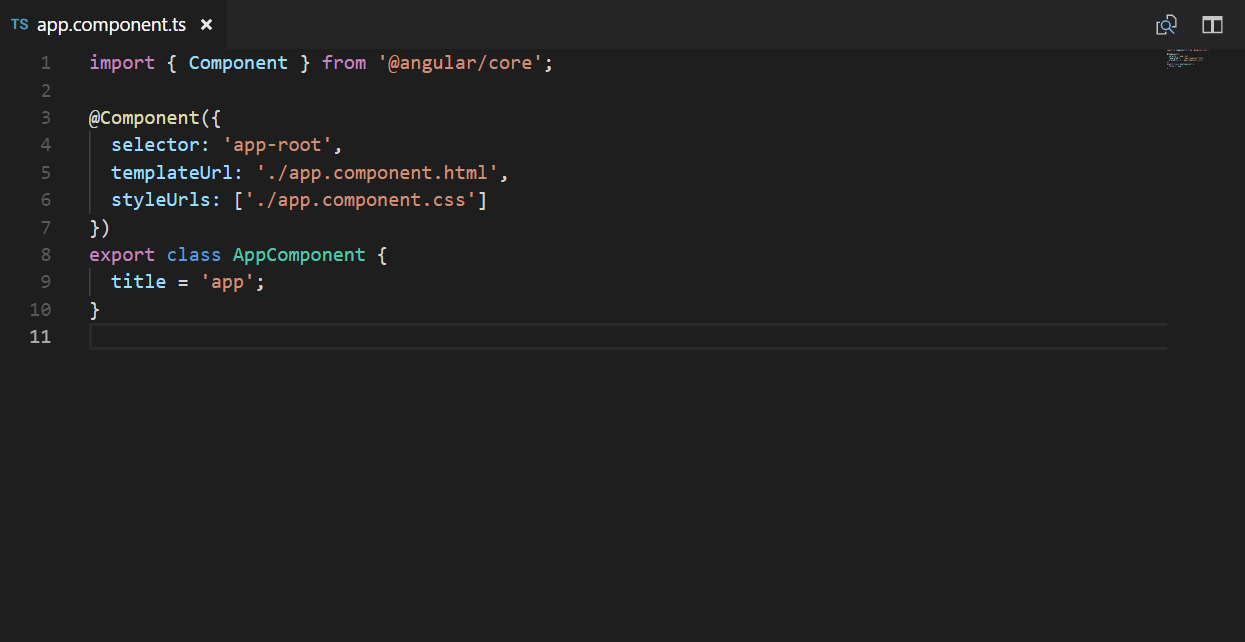 As I have mentioned earlier, you can call component this at any other component by the selector.

TemplateURL depicts the corresponding HTML file for this TS file and the last is styleUrls which represents the styles used by this ts file. Note that this is an array. You can always mention more than one CSS file for one TS file.

Let me just highlight one phenomenon, if you want to use any component call it by its selector name. Let's for example, I want to use the demo component at the demo1 component, then I simply need to call demo’s selector <app-demo></app-demo> (say for example). This will render the demo's HTML at demo1's HTML.

Now, let us create our first component by firing the given below command: 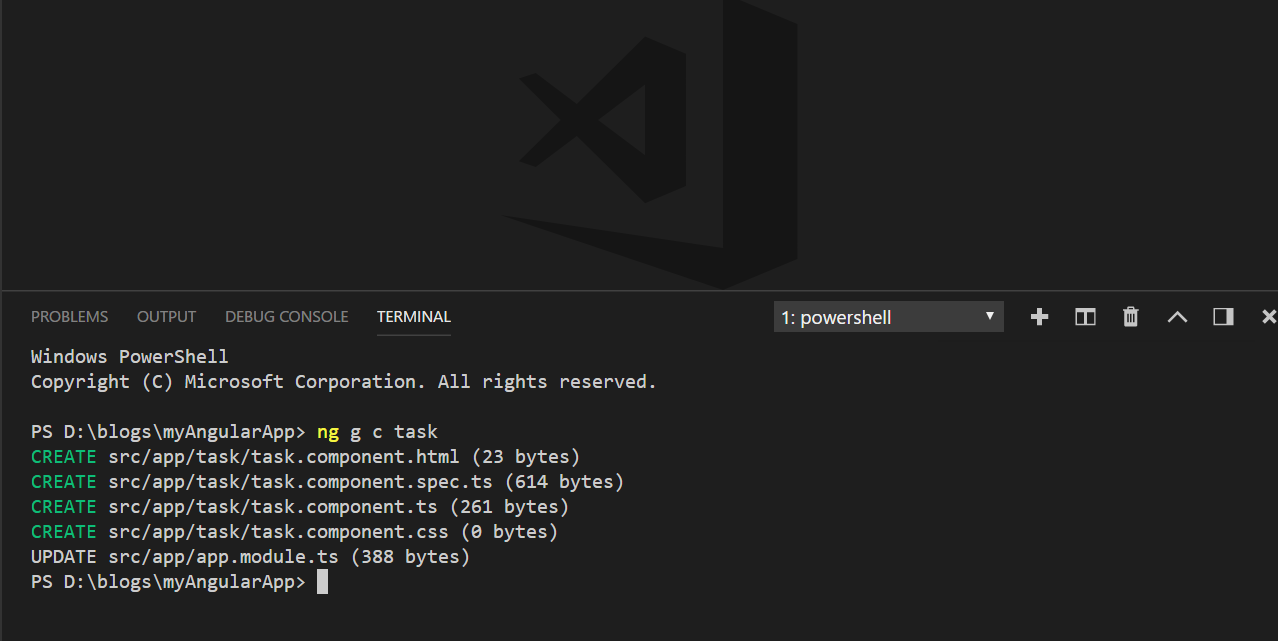 You can open this terminal using VS Code from (view -> Integrated terminal). As we have previously discussed, a component has 4 files inside it. One new message you'll see is regarding app.module.ts. It is the heart of our app. It contains the global declaration for our all components. After creating a component, our app.module.ts will look like as:

Our component should be imported and added to the declaration array.

Now, if you want to see the task component’s HTML as your output. What would you do!? Remember that Selector concept? Yes, you have to add the task’s selector at APP.COMPONENT.HTML. (Because it is the first component that is being loaded by angular if you want to check how? Check your index.html, there you will find <app-root></app-root> which is selector for the app component).

Angular is a full-fledged framework and the core of the framework is a component, hence using and implementing a component is a common step toward building single-page applications (SPA) where the set of components re-presents an application.

Hope you have enjoyed reading this article. Keep going and coding!!