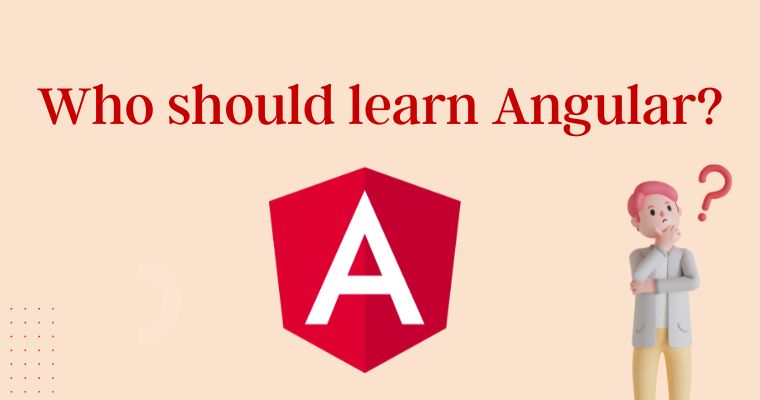 Who should learn Angular?

Angular is the JavaScript-based framework that comes with a bunch of surprises and it is developed by Google's initial land now backed by tons of open source contributors. Using Angular we can create different kinds of applications.

Who should learn Angular?

Angular is the JavaScript-based framework that comes with a bunch of surprises and it is developed by Google's initial land now backed by tons of open source contributors. Using Angular we can create different kinds of applications.

Developing the Angular application can be possible using TypeScript which is developed by Microsoft and when we run the application, at that time it will be converted into JavaScript. Day by day, the word Angular is booming in the world of technology due to its structure, implementation, and easy to use commands provided by the Angular CLI, now a day’s most developers are striving to learn Angular in no time but before that, we should know that who should learn Angular actually in a true sense.

Anyone can learn the Angular framework who has the basic knowledge of Html, CSS, and JavaScript but below is the list that shows who can learn Angular. The angular online training program helps you learn to build projects using web API ASP.NET  MVC5  and node.js.

As you can see in the above list, the person who associated with JavaScript once in life can learn Angular very easily just because the learning curve of Angular is pretty easy to grasp. Below is the simple google trends chart that compares the front-end frameworks and libraries which are.

These are the three popular platform which is being used by developers around the globe thus each of them has its very own advantages and disadvantages as well.

Here in this trends chart, we have compared three of the best frontend platform and can see the above statistics. Angular (Blue), React (Red), Vuejs (Yellow), and all these statistics are only based in India for the last consecutive years. The comparison chart indicates that Angular is being popular amongst the software developer for the year and surely going to heat the near future in the world of information technology. Angular is surely booming in India, but what about the rest of the world, let’s see the below google trends chart which is showing the statistics of three popular platforms.

In this above comparison chart, we can see that React is overtaking angular with less margin, but we don’t need to worry about Angular because the team of developers working hard to achieve a great product that can provide a high-performance app yet small in size when it comes to enterprise application. I know if a fresher has heard about Angular so they may have various questions in their mind like how to get started so basically, there are some prerequisites to dig into the Angular which are listed below.

The angular renders the HTML from the template file which is associated with the separate component so learning and having knowledge about HTML is necessary.

Whenever we develop any application, we need to have stylesheets so angular may contain separate CSS files for each component in order to provide different stylesheets.

It is a hero because every frontend platform like Angular, React and Vuejs used JavaScript heavily so we must know javascript before starting with Angular.

It is the superset of JavaScript, and Typescript is developed by JavaScript, the most important thing is that Anglais completely has written in TypeScript so it and advised having basic knowledge in TypeScript that makes your Angular journey easier.

Another thing you may learn is OOPS concepts, Model view and the controller architecture basic HTML DOM properties and events, different rules of ECMAScript 6 and plus, it, so if you are done with the above guideline you may start learning Angular in a very steady pace without worrying about other libraries and so on.

Angular is a detailed topic to be discussed but while building the Angular applications, it may help the learning process, even sometimes we just don’t need to know what we don’t know perhaps. It is always hard to know the unknown things when you’re starting with and hopefully, this brief guide has given you some of the key areas where you can work upon enlightenment beyond your usual Angular resources, along with a bigger and more constructive look at Angular.

In this guide, we have gone through the different topics like why angular is so popular, who can learn the Angular framework, the basic prerequisites to learn Angular, and other concepts. I hope you got some idea that who can start learning Angular, what are the prerequisites, so now you can start learning your Angular journey, keep visiting for the latest guides, Keep reading.