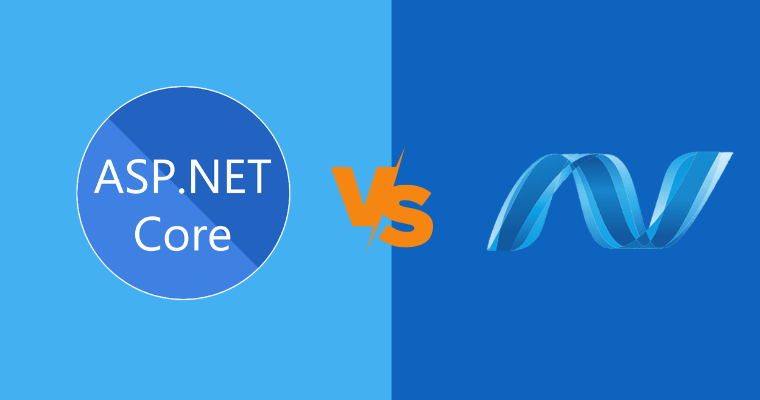 In the year 2016, Microsoft introduced a new framework called .Net Core. Basically, it is not an updated version of the existing .net framework. Microsoft developed this framework as a totally new framework. In today’s web development world, everyone wants to develop web applications based on the secure, scalable, flexible and cloud-ready framework. So, if we want to use Asp.Net Core in today in place of Asp.Net MVC, then before using this we need to understand we are the benefits we can achieve from this new technology and also, what are the new features which are not available in the previous version of .Net Framework. So, in this article, we mainly focused on discussing the difference between Asp.Net MVC and Asp.Net Core.

In Asp.Net Core, there are several benefits or advantages we can achieve over Asp.Net MVC. As per the Microsoft, Asp.Net Core could be a framework that is compatible with building each internet and cloud applications. It is basically a fully open-source platform.

In Asp.Net Core application, project or solutions folder structures have been changes. The major difference in the project structure is that Asp.Net Core projects do not contain any web.config file like Asp.Net MVC projects. So, then question arise that however, the applying deals with completely different configuration settings like authentication or application low-level formatting specific code etc. In Asp.net Core, these will be taking care by some other files namely appsettings.json or custom configuration files. Also, in Asp.Net Core, a new folder named wwwroot added in the project structure. This files basically is the container of all static files which need to be sent to the browser like – css, html, images, JavaScripts etc. The below image has shown a clear difference in both the project structure. 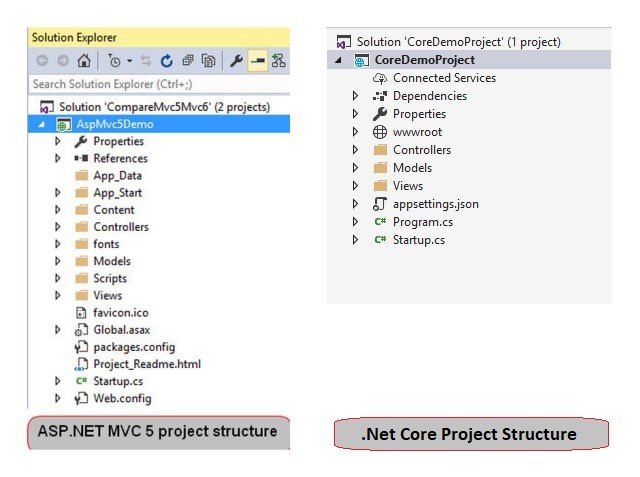 DOES NOT DEPENDS ON IIS FOR HOSTING

As we have already discussed that Asp.Net Core is a Cross-Platform framework, so we can host Asp.Net Core applications not only in IIS but also it can be hosted in the Nginx, Apache, Docker etc. So, we can host the asp.net core application in the Linux webserver using Nginx. In this case, Kestrel will act as an internal web server for processing request.

In case of installation of an associated application that is developed within the .Net framework, it's perpetually one package installation and conjointly needed some runtime surroundings for the Windows in operating systems. But since .Net Core could be cross-platform, therefore application developed during this framework got to be prepackaged and put in severally for the package. Developers have to compile the Nuget packages including within the .Net Core.

Both .NET Framework and .NET Core permits developers to require advantage of sturdy category libraries. But .NET Core uses a redesigned common language runtime named as CoreCLR, and choices a customary assortment of libraries named as CoreFX. Hence, the developers have the option to decide and use entirely the libraries required by each application and enhance the application’s performance by removing superfluous libraries.

.NET Framework does not embrace any durable framework or tools to the mobile app development. But .NET Core compatible with Xamarin with the help of the .NET commonplace Library. Hence, developers can make the most of Xamarin to place in writing cross-platform mobile apps in C# with a shared code base with the help of the same APIs. They're going to a lot of using the tools provided by Xamarin to customize the mobile app for individual mobile platforms like Android, iOS and Windows Phone. 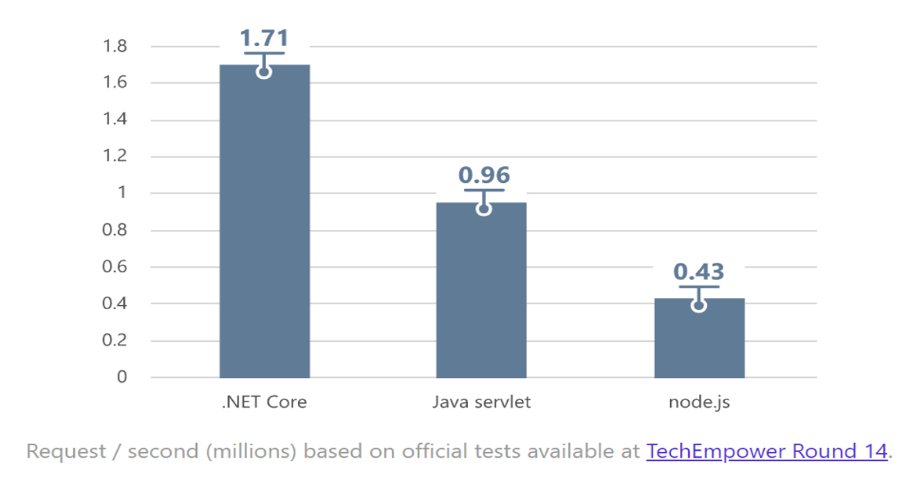 We can add reference of any assembly, library or any third-party package with the help of Nuget Packages. When we run the download of these packages using NuGet Manager Console, all the packages have been downloaded in the Packages folder within the Project folder hierarchy. ASP.NET Core came up with storing all the packages related to its development in Users folder and whereas creating ASP.NET Core applications, Visual Studio will reference them from Users folder. This feature is called Runtime Store for .NET Core a try of presently though you have got around 100 sample ASP.NET Core applications, all of them area unit referencing from dotnet in Users folder that's almost few MBs entirely.

In case of .Net Frameworks, we mean developers are very much familiar with how to reference a dll or a Nuget Packages in a project or solution using Visual Studio IDE. So, with the help of Visual Studio IDE, we can deploy our applications in operating systems including Windows, Linux or Unit. 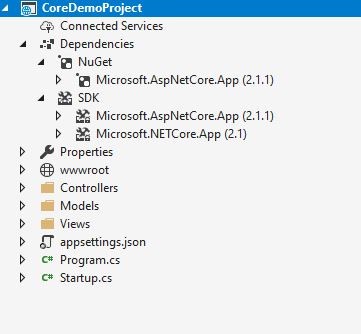 Its Server facet management of dependencies. Client-side dependency management is a lot of necessary as a result of client-side has a lot of totally different packages from the server facet. Client aspect will surely have jQuery, Bootstrap, grunt, any JavaScript frameworks like AngularJS, Backbone etc, images, vogue files. Here, “Bower” and “NPM” are the name of two most important open source community for maintaining Client-Side package management as part of the Dependencies.

Dependency Injection (DI) achieves loosely coupled, additional testable code in the applications. In ASP.NET MVC 5/4 or classic ASPX based mostly applications, we tend to use to own separate DI containers used like Unity, AutoFac, StructureMap etc. We had to form up our project to use DI, its additional effort.

In ASP.NET Core applications, dependency injection is inherent i.e. no setup headache for DI. simply produce some services and obtainable to use DI. In the case of sample .Net Core MVC Applications, sample projects always used inherited DI in the code (especially in Startup.cs file). With the help of this files, we can implement any type of configuration like EF, Authentication etc and also implement custom service as we required.