Microsoft introduced a new feature called Middleware in the ASP.Net Core applications. It is a new concept in the programming language. Basically, Middleware is just a class or component which fired on every request received in the Asp.Net Core Applications. In the previous version of ASP.Net application, there are two different request pipeline exists namely HttpHandlers and HttpModules. Middleware is just similar to like these Http action pipes which can be configured and executed in the both side. 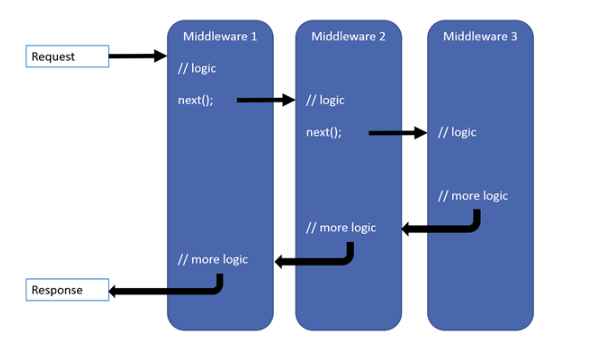 So, in simple word, Middleware can :

Just like other features, Microsoft introduced so many inbuild middleware with the Asp.Net Components. In this section, we will discuss about some of the build-in middleware.

In the above code block example, Run() actually is an extension of IApplicationBuilder instance. This extension method basically adds a middleware into the application request pipeline. This method accepts a RequestDelegate parameters which handles any request into the application. The main signature of the Run() is as below –

Since, this method accepts a RequestDelegate as a parameter, means that it can accept the HttpContext as parameter and it return as Task. That’s why we use lambda expression for returning the string in the above example. We can also specify a separate asynchronous function for returning the result and then that function need to invoke within the Run() as below:-

So, as per the discussions till now, it is clear that middleware basically defines the current step process which need to be executed and also, after completing each step it directed to next step for further execution. So, as per our requirement we need to build multiple middleware in the pipeline of request and write all code within the configure() is not good idea since it will not extensible or clean. We always want to define a middleware as abstract or a separate file so that every middleware can perform a single type of responsibilities. For that purpose, we first create a class named MyMessageMiddleware which will display some text message before and after execution.

In the above class, we use the next RequestDelegate by the help of dependency injection as a part of the constructor. Also, we define a method named InvokeAsync which is as per the convention and we pass HttpContext as parameter to this function. Also, we pass the HttpContext to execute the next delegate call.

Now, we need to create an extension method of IApplicationBuilder to define the custom middleware pipleline.

So in this article, we discuss about the concept of Middleware, why it is required in .net core application, how we can configure it and also how we can create custom middleware for our applications. So, we need to remember the key points related to the middleware: