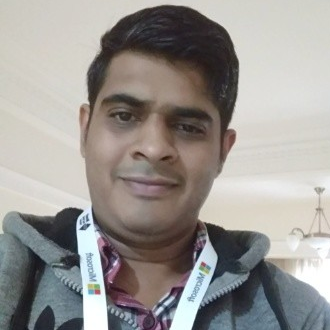 Over the years .NET travelled a lot, There was a time when Applications are limited to .NET framework and server-desktop architecture only, but Mobile phones, smart devices played a huge role and bring evaluation in this field. .NET framework has upgrade itself to Xamarin platform and supporting cross platform development including UWP (Universal windows platform), Android and iOS, gradually .NET moved from Xamarin to .NET Core, A unique framework where cross operating system development is possible (development on Windows, MacOS, Linux). But is there some set of API exist that will support all these frameworks (I can say support to all .NET flavours) ? The answer is YES, We can use .NET Standard for it. Let’s see what is .NET Standard

What is .NET Standard?

.NET standard is the set of API that is available on all .NET implementations, It will create some type of uniformness, a portability that supports.Net Core, Xamarin and .Net Framework. Basically, It is the set of Base class libraries (BCL) that support a wide range of technologies like .NET Framework, .NET Core, MONO, Xamarin, Mac, Android, Universal Windows Platform, Windows Phone etc. The Base Class Library contains classes and basic libraries like exception handling, string, I/O, Network, data and collection. 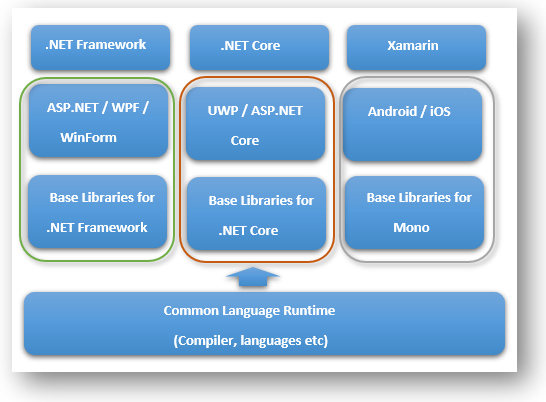 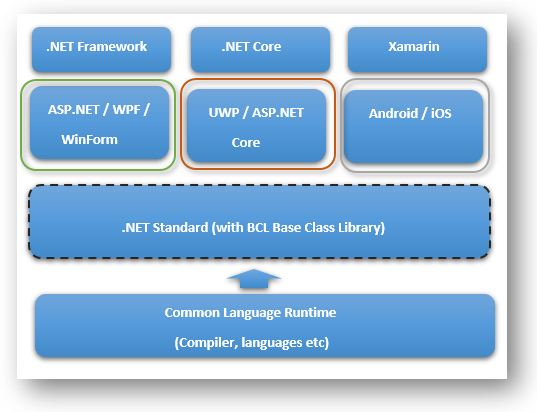 Here is the .NET standard version and compatibility list (Given by MSDN) :

If you want to build a Apps that will support .NET framework V4.5, Windows, iOS, Android, Linux, Mono and UWP then you should go for .NET standard version 1.0.

One more example, suppose you want to build the application that support .NET framework 4.5(only) and .NET core 1.0 then you can use 1.0 or 1.1 .NET standard version

So here we can say that Less the .NET standard version, the more will be different platform support and vice versa

In .NET standard 2.0 you can get following new things

Here are some advantages of .NET standard.

Microsoft has developed a class library which contains set of API (base libraries) that support .NET framework, .NET Core and other cross-platform operating systems, this set of class libraries is known as .NET Standard. It is the alternative to PCL (portable class library). Developers can use this library to develop apps that support multiple platform apps. We can say it is the roadmap to run your apps in the different environment with a single set of code.