#LearnAtHome #UseYourTime Get Access to 95+ Courses only at INR 499 !! Offer Ending in
D
H
M
S
Get Now
Browse Articles

Getting Started with ExpressJS 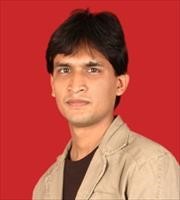 In this post we are going to start with ExpressJS by getting the explanation of how to start with environment setup, package management, also learning about its versioning, advantages, and disadvantages.

Let’s get the definition from expressjs website what they define of ExpressJs as "Fast, unopinionated, minimalist web framework for Node.js".

According to their definition one thing is clear that it is fast in performance, next they define express as unopinionated. What does that mean?

That means with ExpressJS developers are flexible to solve complexity in several ways, there’s no specific way to follow.

Lastly express define as a minimalist web framework, which points the simplicity and lightweight of the framework, where Node.js is open source JavaScript runtime environment support on various platforms like Windows, Linux, UNIX, and Mac OS X.

According to Wikipedia ExpressJS Initial release was November 16, 2010, the latest stable version is 4.16.3 which is released on March 12, 2018 about 5months ago by fixing different issues like incorrect end tag and 404 output for bad path.

Here’s the list of version evaluation, let’s have a quick overview for better knowledge on ExpressJS road-map.

Get more details by following the link: https://github.com/expressjs/express/blob/master/History.md.

ExpressJS with all those definition like its simplicity, flexibility there’s another thing which is its biggest community. Here’s the list of express advantages:

After having all those readings, let’s have some practical knowledge with a sample application.

In this section we are going to have a practice session about how to start with ExpressJS startup application using Express-generator.

To start with that we need to prepare the NodeJS development environment by installing the latest version of NodeJS. 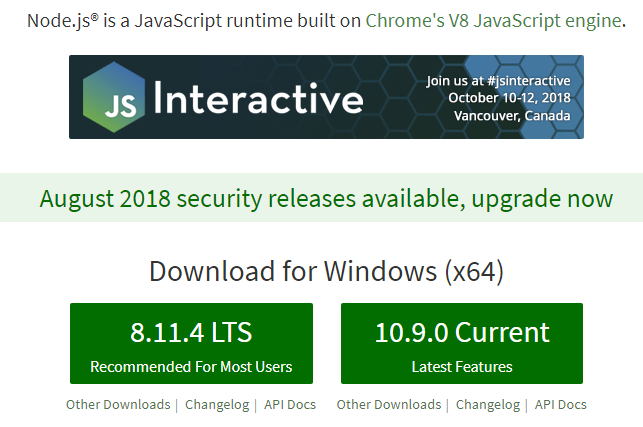 After installation check the version in command prompt by typing "node -v" then press enter, it will show the installed version of NodeJS. Type "node -h" to get more command line options.

So far we are good to go for next step to use the ExpressJS application generator tool for creating sample startup application with a single command.

After successful installation let’s create a sample application named "FirstExpressapp" with the command in command prompt.

Go to application folder where the sample application will create then press n hold Shift+Right mouse click to show option "Open command window here" like below image. Click on it, this will open the command window with relative folder path. 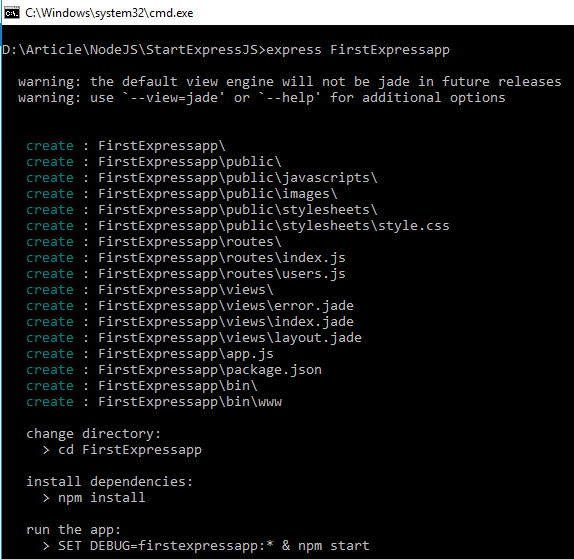 As we can see startup application is created in the desired folder. Next step to install NPM packages to our application for package dependencies.

Change the directory like below image to point the application source where NPM packages are going to installed.

Open the browser type "localhost:3000" in URL bar then hit enter you will see the welcome message in browser.

In application folder we can see below list of folders.

let’s have explanation of all those auto generated folder by express-generator.

In final words, time to get back those points which we have learned. Here’s the listed recapping points:

Hope this will help them to clarify the development environment, application architecture, package managing who are getting started with ExpressJS.

React is an open-source front-end JavaScript library developed by Facebook in 2011. It mainly follows the component-based approach for building interactive & reusable mobile and web UI components. It is basically used for building single page application and handling presentation layer for both mobile and web apps. The main advantage of ReactJs is it is scalable, fast and simple and it has one of the largest communities supporting it. In this eBook, you will learn about the fundamentals of React like JSX, Component, State, Props, Routing, Hooks, and many other topics.

Have You Taken 7-DAY Challenge to Learn?
Take A Free Challenge Now
World Class Learning Platform for Anyone