There has been a massive rise in the growth of fronted web technologies including websites, web applications, and apps. A lot of tech companies are eager to embed new updates and features into their existing apps. ReactJS serves as an excellent way to develop native apps which run on both Android and iOS.

When the matter comes to software development, the greatest issue most companies suffer from is the lack of qualified professionals and software developers. More and more software companies insist to hire skilled React developers. Being a renowned and in-demand technology, it demands a certain level of expertise to offer the best development work. To accomplish certain sets of projects, companies are looking to hire ReactJS developers with exceptional skills.

Before diving deep into the salary offered, let’s first be familiar with what ReactJS is and what it means by ReactJS developer:

It is a JavaScript library useful for building user interfaces. This library is maintained by Facebook and many individual developers/companies. In other words, ReactJS is an open-source, front-end JavaScript library that is well-known in the web development domain, specifically for single-page applications. Moreover, it is extensively used for creating interactive and responsive UI elements for mobile and web apps.

The other ways in which ReactJS is represented are React or React.js. This framework can facilitate developers to develop efficient web apps capable to transform the data without page reloading. ReactJS can smoothly work as a fusion with other JavaScript libraries including AngularJS.

Some of the salient features of ReactJS:

Who is a ReactJS Developer?

Being a multi-layered framework, ReactJS has been a major delight for organizations and developers. ReactJS developers are responsible for the design and implementation of UI components for JavaScript-based web applications as well as mobile applications through the use of open-source library infrastructure. They involve in the whole process beginning from the conception to the key testing process. Moreover, they follow leading ReactJS workflows like Flux.

In other words, they are front-end developers responsible for building contemporary UI components to enhance application performance. They use their knowledge of HTML, CSS, and JavaScript. They work with web designers, testers, and project managers to develop a robust application.

ReactJS developers have been influential in aiding business owners to emphasize their core business areas without concerning about the rest of the IT-related activities. Consequently, they contributed to providing client satisfaction.

With this overview of ReactJS and ReactJS developers, let’s go through the details of the salary offered to them: 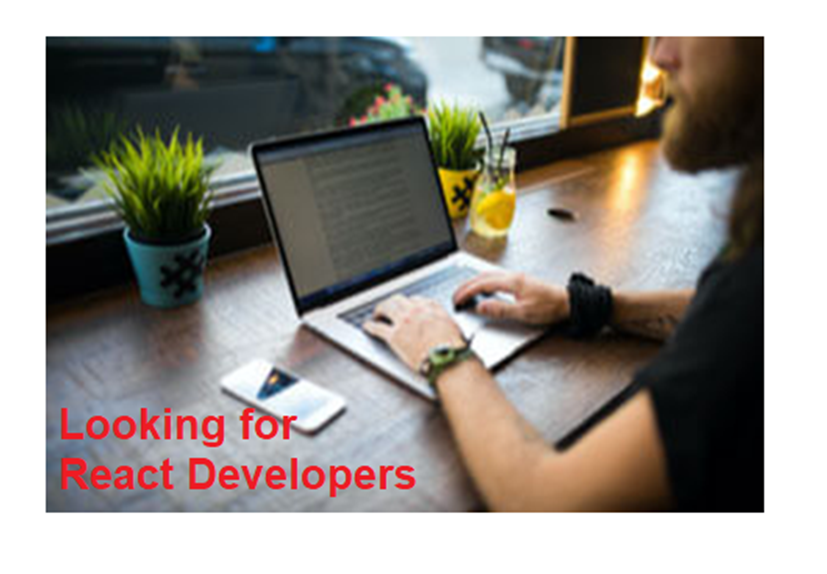 The average salary offered to frontend developers in India is approx. ₹475,800.

Also known as Client-side developers, they are the ones are specialized in visual user interfaces. Their key responsibilities include handling layouts and aesthetics. The code which they develop is what assists the end-users to operate the browser or webpage on their mobile or computer. Because users are using multiple devices, the frontend developers are accountable for maintaining compatibility across multiple devices as well as assuring that the UI outfits the varied screen sizes. Usually, frontend developers are equipped with skills like user experience (UX), user interface (UI), HTML, CSS, JavaScript, and UI frameworks.

The average salary of backend developers in India is Rs ₹680,600.

Also known as server-side developers, backend developers usually need to integrate with a wide array of services such as databases, data storage systems, email systems, caching systems, email logging systems, etc. These developers are skilled in the implementation of design and functional core logic. Furthermore, they are held responsible for maintaining the scalability and performance of the software. They are also tasked to develop smooth operations for servers and systems that can be at remote locations compared to end-user locations. To work as React backend developers, you must know programming languages like C, C++, Python, Ruby, Go, Perl, Scala, etc.

The average salary of backend developers in India is Rs ₹600,000.

Usually, full-stack developers hold a decent understanding of frontend and backend practices and models. Their key responsibilities include designing user interactions on websites, developing servers, and databases for coding for website functionality and mobile platforms.

Primarily, full-stack developers must focus on all aspects of a project, right from its conception to the final product. Moreover, they are accountable for designing and developing front-end web architecture to ensure the responsiveness of different applications. Other duties include working with graphic designers for web design projects.

Various factors like location, experience, skills, the profile of the organization, training, certification, etc. influence the salary of ReactJS developers. Let’s go into the details of some of these prominent factors:

Varied job roles are prevalent which are related to the ReactJS technology. Depending on skills and experience, ReactJS developers can choose among these job roles.

The average salary of frontend developers is approx. ₹ 4,76,000/annum.

The average salary of full-stack developers is approx. ₹ 6,00,000/annum.

In India, entry-level React.JS developers holding 0-1 year of experience can expect to earn ₹3,50,000/annum. As they amass experience, the salary can reach ₹1,300,000/annum.

Those ReactJS developers holding 1-4 years of experience can earn an average salary of ₹5,40,000/annum.

Mid-Level ReactJS developers are the ones who hold 5-7 years of experience. They earn an average annual salary of approx. ₹13,00,000/annum.

When amassing experience, ReactJS developers learn various UI practices which help them to make good decisions. Consequently, they can lay a positive impact on businesses and in the manner which they operate. Because Google launched Android 5 and its Material Kit, the industry has perceived plenty of UI as well as frontend challenges.

When it comes to assessing ReactJS developers’ salaries globally, it is vital to look at the salary figures in some prominent countries. The average salary offered to React developers in the US is

Now when it comes to annual React.JS developer salary and job opportunities in India, it is highest in Bangalore, followed by Hyderabad, Pune, Mumbai, and New Delhi. Since Bangalore and Hyderabad are the hubs of the tech industry in India, it is more likely that the salary of React developers is higher in these cities.

The average salary of ReactJS developers depends a lot on recruiters. The below list shows the names of famous companies that hire React.JS and web developers along with the average annual salary they offer:

After going through the above influencing factors, the question now arises what’s the difference between salaries of React developers and React Native developers. You can get the relevant info from the following section:

React Native evolved after React. This implies that it’s still quite new and there is a scarcity of programmers who can function with this framework. Essentially, the average salary of React and React Native developers salary is almost the same. Keep in mind that React Native works efficiently for working in product companies and for developing native software. On the other hand, React allows you to be more flexible in regard to the selection of projects.

How to hire ReactJS Developers?

Though organizations comprehend the significance of recruiting ReactJS developers, more emphasis is laid on selecting the appropriate resource.

Listed below are certain ways through which organizations can recruit competent ReactJS developers:

The rapid rise of companies and apps demands the proficiency of front-end developers. The corresponding market is not saturated and there are excellent opportunities to prosper in this field. Certainly, ReactJS developers have a promising future because ReactJS is depicting no chances of beating off.

Compared to peer competitors, ReactJS developers are paid admirably and are in demand. New updates and approaches to rendering are anticipated soon. Facebook and the whole community are attempting hard to keep improving the speed and effectiveness of ReactJS. Thus, ReactJS must give a hard competition and ultimately appear as a winner.

New fragment syntax to JSX is expected to be added soon and it will require no keys. The upcoming version of ReactJS is expected to incorporate enhanced server-side rendering. The same will work flawlessly for developers. The chances of error handling are improved. Looking at the way it is progressing, the demand for ReactJS developers is proportionally higher.