Getting Started With Vue.js

This article is aimed at the people who want to have a starting point for Vue JS. In this article, I have covered all the general points related to the same. Hope you find it useful!

The Vue is a javascript-based framework for building extensive user interfaces. It is capable of powering sophisticated Single Page Applications (SPA). It is one of the three most popular modern JavaScript frameworks or libraries, with the other two frameworks are being Angular and React respectively.

Vue is quite popular because of some factors like it is pretty easy to grasp and as straightforward as it gets when it comes to writing code or its learning curve for the developers. It can also be used as a Native feature when it can be used with a combination of other libraries and tools effectively.

Vue JS is one of the new-age software technology that is being used widely for web development. As its name implies, it is JavaScript based framework developed by Evan You for building a rich client-side application using JavaScript.

Who is Using Vue.js?

Now, let me make it more interesting by letting you know who actually is successfully using Vue in the real scenario.

Facebook has shown trust in Vue, they have used this framework for the marketing side of their Newsfeed.

Netflix has applied Vue in their two smaller, internal apps.

Adobe has adopted Vue for its product called Portfolio. They have taken the easy integration advantage of the framework and migrated their existing codebase to the Vue.

Xiaomi has used Vue to build their fantastic products and for proving the framework’s strong international adoption.

Alibaba the public company of China has used Vue to give excellent experience to their users.

Interesting!! Isn't it? Yes, Vue.js has started gaining popularity because famous companies have already started using it in real-time.

Getting Started with Vue

So, I hope you have gained a whole lot of interest in knowing more about this framework. Let’s quickly move to the prerequisites for Vue.js!!

According to me, to learn anything not only technologies, but the first thing you require is also your Interest. Now, the next thing which comes to our mind is which IDE shall I use. Right? Yes, you can use any editor of your choice Like Sublime Text, Visual Studio Code, etc. But I prefer using Visual Studio Code to develop the app because it is free, it has various extension availability, moreover, typescript snippet is there which will add frequently used code snippets.

Once the choice regarding IDE is done. Next is to install Vue CLI on your machine. Before installing Vue CLI, NODE.JS version 8.9 or above and NPM are required. You can download node from the site: https://nodejs.org/en/ NPM comes along with Node, so installing nodes will install Node and NPM at once.

After performing this step, let's run the command at your command prompt to ensure the version and proper installation of it.

If your command prompt answers the versions for node and NPM properly. Then you are good to go to the next step which is to install Vue CLI(Command Line Interface). Vue-cli command-line utility responsible for quick project generation and setting up required components and much more of the boilerplate application structure.

To install new packages, execute the following command at your command prompt:

After this step, CLI has been installed on your machine. Before, creating a new application, ensure that proper installation has been done by firing the following command.

If it responds well, moves to the next step without any wait. Create your new project by executing the below-given command:

Once you are done with the above all steps, just jump into your application by executing the command cd (YourAppName), and then to run your app, fire the command

If everything goes well up to now, you can open the browser with the given port address and you will get to see this output on your browser 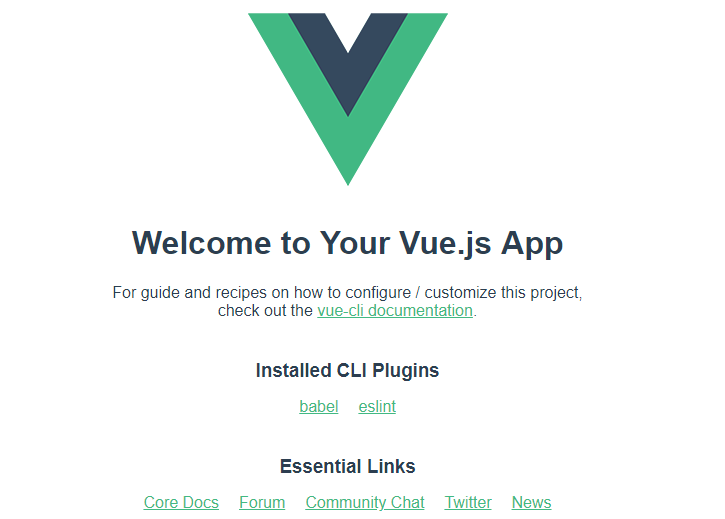 We are done with the installation part and now we have our boilerplate Vue application has been created and running into the browser, but there is of no use because it has some default code that does not require.

Now, let us switch to the next step after installation. Open your app in the IDE you have chosen. You might get to see a whole lot of files and folders once your project is made. Right!? Don’t worry. Let’s clear it out. 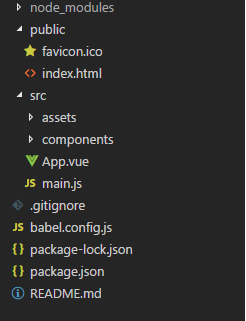 Besides Package.json which contains all configurations, these are other files that are inside the initial project.

Index.html is the main app file from where the user interface will be rendered into the browser. 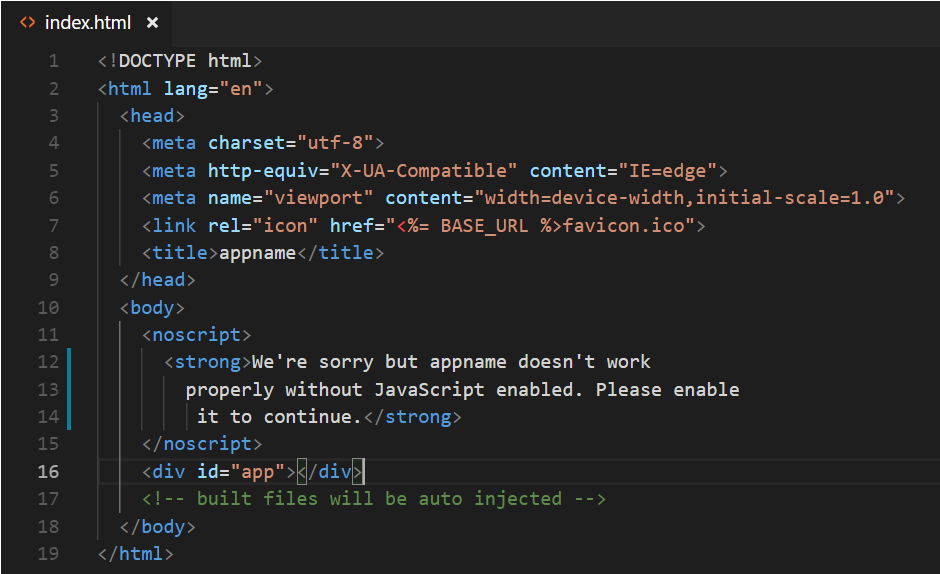 There is only one div element that Vue will use to attach the DOM.

Src/main.js is the main javascript file that will be driving our app.

First-line depicts the import of the Vue library and the next is App Component from app.vue. We set productionTip to false to avoid “you’re in development mode” in the console.Next, is the creation of the Vue instance, by assigning it to the DOM element #app, which has been defined in the index.html file, and telling it to use the App component. 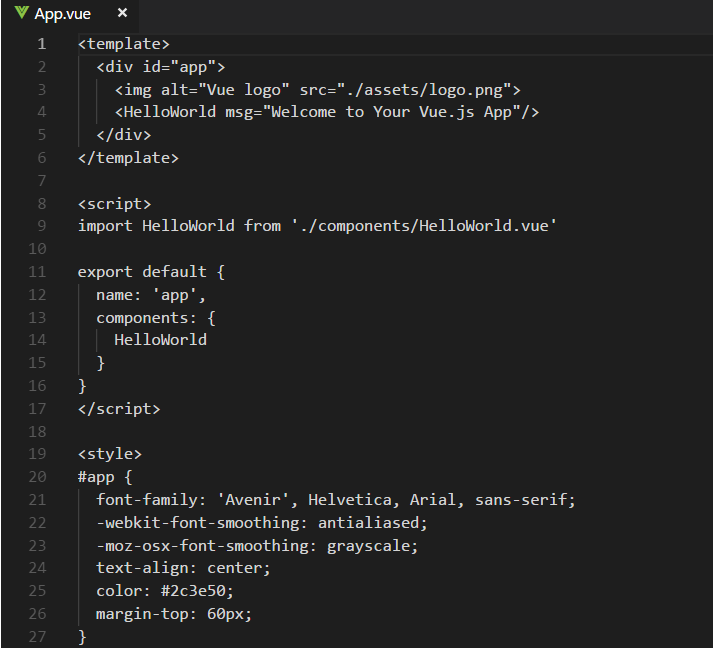 The script contains the import statement, which will import the HelloWorld component from the component section.

Src/component/HelloWorldComponent is the component that is included by the App component. It has all the style and HTML which you see when you first run the app in the browser. But, one interesting part about this component is the scope attribute. 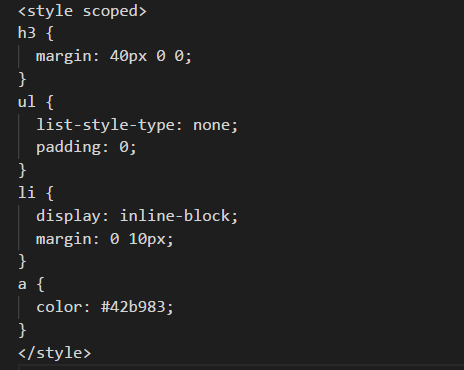 This <style scoped> attribute is added to limit this CSS to this component only. This feature won’t leak your CSS to another part. Next is the script part.

This component is exported with the name ‘HelloWorld’ and the data which will be displayed in the output is stored in the "msg" variable. So, understanding file and folder structure are very necessary to start developing the first app in any new technology.

I hope you have got a basic idea about what is Vue and how to get started with Vue. I have tried to make you clear about the basic things about Vue.js. So, keep going and coding!!