Xamarin.Android is a part of Xamarin family to build a native Android app with C# and Xamarin. Xamarin.Android provides the same UI controls as you have in Android with Java.

Android is an open-source operating system based on Linux kernel. Android was originally developed by Android Inc. and subsequently purchased by Google. Android provides a rich application framework that allows you to build innovative apps and games for mobile devices in a Java language environment.

The native Android apps development can be done using Android Studio or Eclipse using Java as a programming language.

Android operating system is a Linux-based stack of software components which can be divided mainly into five sections as shown below in the following diagram.

The Linux kernel provides a multitasking execution environment which allows multiple processes to execute concurrently. The Android Runtime (ART) relies on the Linux kernel for underlying functionalities such as threading and low-level memory management etc.

Each android app based on Android version 5.0 (API level 21) or higher, runs in its own process and with its own instance of the Android Runtime (ART). ART has been written to run multiple vms (virtual machines) on low-memory devices.

In order to execute app within an ART, the app code must be transformed from standard Java class files to the Dalvik executable (.dex) format, that's optimized for minimal memory (Consume 50% less memory) footprint than standard Java bytecode. Build toolchains, such as Jack, compile Java sources into DEX bytecode, which can run on the Android platform.

Xamarin.Android apps run within the Mono execution environment. The Mono runtime is written in the C language and runs side-by-side with the Android Runtime (ART) virtual machine. Both runtime environments run on top of the Linux kernel and expose various APIs to access the underlying android system.

In Xamarin.Android apps you can access the various low-level features of the Android operating system either by calling .NET APIs or using the classes exposed in the Android namespaces which provide a bridge to the Java APIs that are exposed by the Android Runtime.

The Android OS facilities like Audio, Graphics, OpenGL, and Telephony are not available directly to native apps. They are only exposed through the Android Runtime Java APIs residing in one of the Java.* namespaces or the Android.* namespaces.

So, to access these APIs in Xamarin. Android, a managed callable wrapper is required which acts as a JNI (Java Native Interface) bridge to invoke Android code and provide support for overriding virtual methods and implementing Java interfaces.

Android callable wrappers are a JNI bridge which is used to invoke managed code when the Android runtime needs. When an Android Callable Wrapper (ACW) is created from Java, the ACW constructor will cause the corresponding C# constructor to be invoked. 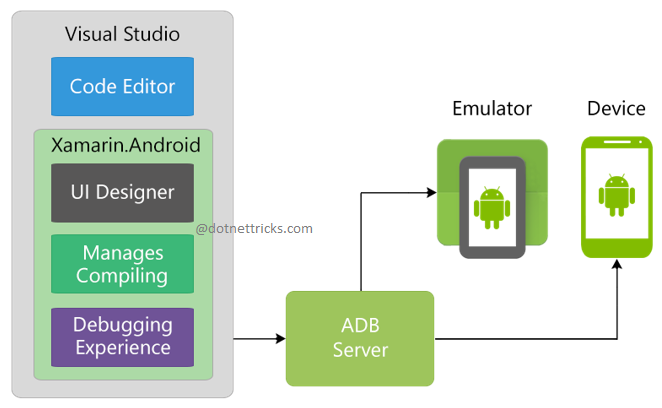 I hope, now you have an understanding of Xamarin. Android to build native Android mobile apps. I would like to have feedback from my blog readers. Your valuable feedback, question, or comments about this article are always welcome. Lets us know if you would like to know more about Xamarin training program.