Normalization or the database normalization is a process to organize the data into database tables. To make a good database design, you have to follow Normalization practices. Without normalization, a database system might be slow, inefficient, and might not produce the expected result. Normalization reduces data redundancy and inconsistent data dependency.

The worlds' database community has developed a certain guideline for ensuring that the databases in our application should be normalized in a specific way. These are referred to as normal forms and are numbered from one where the lowest form of normalization is referred to as the first normal form or 1NF through five which is the fifth normal form or 5NF along with the BCNF which is the Boyce Code Normal Form. While working with the real-time application or scenarios, we will often see different forms of the normalization such as 1NF, 2NF, and 3NF, along with the occasional 4NF and BCNF. but the fifth normal form (5NF) is very rarely seen and used in the enterprise application due to its complexity.

To understand normal forms consider the following unnormalized database table. Now we will normalize the data in the below table using normal forms. 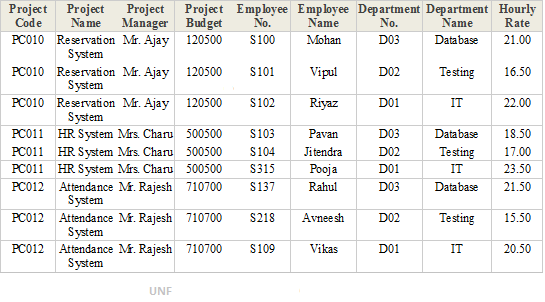 As you can see in the above example, We have divided our 1NF table into two tables viz. Table 1 and Table2. Where Table 1 contains project information. and Table 2 contains information on the employee assigned to the specific projects.

We have introduced a new column called project_code which is the primary key for table 1. Records can be uniquely identified in Table 1 using the project id column itself.

Database designing is one of the critical tasks for the successful implementation of a database management system of the application that meets the data requirements of an enterprise application to be developed. Doing database normalization in DBMS is a crucial process that helps to create concrete database systems that are cost-effective while having better security models attached to them. The complete functional database dependencies are a very important component of the normalized data process

In this article, I try to explain the Normalization with an example. I hope after reading this article you will be able to understand Normal Forms. I would like to have feedback from my blog readers. Please post your feedback, question, or comments about this article.