Getting Started with DotNet CLI

Do you want to develop cross platform apps that will run on Windows, Linux, MacOS then you should for .NET Core, that says “Develop once and deploy on multiple platform”. I have explained about .NET Core in my previous article, you can refer it here To Develop Apps using .NET .Core you can use below methods 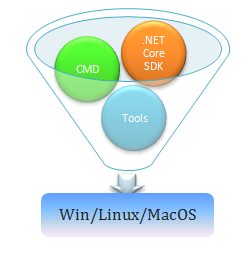 In this article we will see how to use .NET Command Line Interface (CLI) to create, build, compile and run .NET Core Apps that will deploy on Windows, MacOS and Linux, So let’s get started

CLI having different commands (that includes Basic command set, Project Modification command set and Advanced command set) that helps to create a base or a foundation, that will support IDE, editors and tools.

This command is used to create New file that file may be solutions file, template or configuration file the syntax of this command is as below

The example, Dotnet restore [Here is the root is the optional path which is project directory, default it is current directory]

This command is used to build a project with all its dependencies, The syntax is as simple

The example, dotnet build[<PROJECT>, is the path of project that needs to be build, by default it takes current path as project path]

As name suggest this command helps to create deployment package, The resultant output is a directory that contains IL (Intermediate Language) files, config files, JSON files, NuGet Packages if exists. The Syntax is

The example, dotnet publish[<PROJECT> is the path of the project file, default is current directory]

This command is used to run application, it is very helpful for rapid development from command line, the output of the application is written to the default location that is bin/<configuration>/<target> the syntax is dotnet run, If you want to run any specific project then the syntax would be

in above example projects/MyProj/MyProj.csprojis the project path to run.

This command is used to execute Unit Test Cases basically it’s a console that support unit test runner, the output of the command is result of each test case that is fail or pass, The syntax is

The example, dotnet test[<Project> is the project path which is optional, default path is current directory]

These commands are used to modify project settings like adding and removing of package, references etc.Let’s see them one by one

This command will add package as a reference in project

The example, Suppose, I want to add the test.Jsonpackage reference to project, then I can use syntax like

This command will add reference in project from a project, in short project can be add as a reference in another project

The example, Suppose, I want to add the app.csproj project in another project then the syntax will be,

This command is use to remove package from project

The example, Suppose, I want to remove the test.jsonpackage from my project then the syntax will be,

There are some advanced commands that deals with nuget packages

This command is use to remove or delete nuget package server

The example, Suppose, I want to remove the AspNetCore.Mvc package from my project then the syntax will be

The example, Following command will push test.pkg to server and publish it

This command is same like our build menu in Visual Studio, it will build the project with all its dependencies

There are lot of template exist in C#, F# and VB.NET template. you can install them using CLI commands with different attributes. Some of them are listed below with their CLI commands

For more information you can checkout link .NET Template with CLI commands

To start building app on .NET Core with CLI, first you need to install .NET SDK. As .NET Core is supporting cross platform compatibility, .NET Core SDK come with cross platform version including Windows (32 and 64 bit), Linux and MacOS. To download your desired installer you can check next link Setup Installer, Now move to Command prompt and type following commands

Explanation : With the above new command we are creating console application in my_first_app directory

If you move to my_first_app directory, you will find Program.cs file, it has ‘Hello World’ program written inside it. The code of the program is given below

Explanation : It is the basic command used to run project

That’s it. We have successfully completed out first .Net Core program with CLI commands

In this article we have learn, If we want to develop a code without visual studio and without windows platform (Linuxor MacOS) then command Line Interface is really good tool. It has all necessary capabilities of Visual Studio starting from New project creation, build, compile, run to publish, It’s so simple that one can easily learn and develop .NET Core app that will crossplatform compatible .NET Core CLI code is available on GitHub